Build it! Bash it! Break it!

Here are some links to recommended resources. These are affiliate links to help build an armored arena and support other MACRO projects. There are other places to purchase these and other items, but this is where I get much of what I build / play with.

3d Printers
FDM: for budget printers we like Creality because of value for the price. This is by and far a very truncated list, and there are a lot of good printers on the market.

A good starter printer is the Creality Ender 3 . The Ender 3 has a huge user community and are easy to use. about 8″ x 8″ x 10″ print area

An upgraded version Creality Ender 3 Pro Like the ender above but with some upgrades. about 8″x8″x10″ print area

A different Creality printer, the Ender 5, changes up a bit by moving the build plate downward rather than back and forth. The Ender 5 pro will be released shortly with dual z motors and some more upgrades

DeltaMaker is a cool high quality US made printer built in Orlando FL that is made to print right out of the box. I don’t have one of their printers yet, but I know one of the guys who makes these and I trust his judgement of the quality of this tool.

Duramic 3D makes some really nice PLA+ for about the cost of standard PLA. I haven’t tried their PETG yet, but I will be ordering some soon.
Duramic PLA +
Duramic PETG

I have been getting brittle spools of inland, so I took them off this list, I still use Solutech PLA and Ziro… I have ends of Ziro spools which still print fine after sitting for a year open.

Budget Balance lead Charger: These work… but they are slow… very slow… and they are cheap… but they do have other limitations like they can’t discharge your lipos, and can’t rescue a over-discharged battery

Keenstone Lipo Charger: I’ve been using this charger for over a year for both robots and for RC hobby stuff. It has a lot of good features and it’s pretty durable. This charger can also charge lion, NiCad, lead acid, and other types of batteries, it can discharge cells, balance cells, rescue over-discharged batteries (sometimes) and you can adjust the charging amperage which lets you set the speed (slow to medium charging is safer and better for the batteries.) We’ve tried some other multi-chargers, but this one works better than the others we have tried.

2s 400mah batteries: I have a stack of these and at $17 for 2 dollars, it’s a pretty good deal. You shouldn’t need a jucier battery for a 2-3 minute combat match and these are only about 22g each. There are lots of battery choices, but this is a good budget place to start. We tend to use JST connectors for inside of our bots because they are lightweight and robust enough for our needs. There are a bunch of other choices out there.

3s 11.1v 450mah batteries: a slightly larger and much voltier battery, this will get things spinning and still let you go for 2-3 minutes while only weighing about 40g. This battery also has JST connectors

Fire resistant Lipo bag: we strongly recommend that you invest in one of these… they aren’t very expensive, and will keep you a bit safer.

Transmitter – FS-i6
Flysky 6 channel (hackable to 10) 2 stick style radio
it comes with one FS-IA6 receiver and can bind to a bunch of different bots or models to them… this is an RC aircraft style receiver and can be used with planes, drones, helicopters, and lots of other things… plus Bots! It can use any AFHDS aircraft receiver

Transmitter FS-GT3B
Flysky 3 channel “pistol” style radio FS-GT3B comes with one FS-GRE3 receiver. This is the sort of controller often used for RC cars and boats, and it has a third channel that is basically off/on though you can hack the radio to use up to 8 channels with the other controls. It is pretty sturdy and has a lot of adjustment for the price. These radios are good for basic robots and are easy to use and setup. You can also add multiple models and use the same radio for other hobby vehicles

Transmitter
FrSky Q X7 16 channel 2 stick radio. This is a much higher quality radio (and 3 times as expensive as the flysky). If you want to spend some money on a radio because you want to fly drones or planes, this is a really good choice… but it’s price is commensurate… There are much more expensive systems, like Futaba radios, but the Q X7 is a great all around radio. It does not come with a receiver and requires a (not included) battery

D4r-II Receiver : This is the least expensive receiver on amazon for the Q X7 that will work for bots…

Gens ace 3800mAh 7.4V 2S1P: The battery I picked up for my Q X7 after reading a lot of reviews from folks in the flying and drone community. It’s overkill for a single match… but this (the largest battery that will fit in the radio) is about the same price as the “official” Tanaris battery and if you happen to forget to charge it or leave your radio on in your car, it won’t quit on you… people say they have used these batteries for an entire weekend of flying and not had to recharge… It can also charge on the same charger you use for your bot.

2s/3s Dual Bi-Directional Speed Controller for Tank Crawler and Boat. This controller is pre-mixed so you plug one input into your throttle channel and the other into steering and don’t have to mess with mixing… this is pretty much required if you are going to use a pistol style controller… and still very helpful if you are using a stick style controller A downside to this kind of speed controller is that if one channel dies, you need to replace both channels

2s reversing single channel speed controller cheaper than the above controller, you need one per motor (or pair of motors) that spin in the same direction…. and unless you include other steering gear, you will need two of these… they are cheaper for a pair, but heavier and you would have to do your own channel mixing so a bit more difficult, especially if you are using a pistol controller

130 motor with TT gearbox larger than the n20, these motors are much torquier but larger and heavier than the n20s.We have 3d printable hubs for the k346 tires that work with these 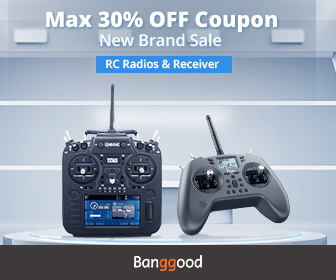